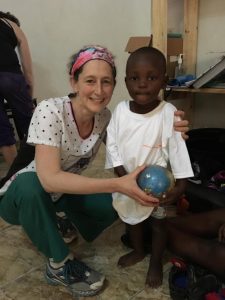 How is it possible that I can be blessed with a roof over my head, relatively healthy children, parents and siblings? Why was I so lucky to come into this world never worrying that I’d have shoes on my feet and clean water to drink? What did I do to deserve to be able to make simple choices all day long based on what I WANT not on what I may or may not NEED?

These are some of the many questions that ran through my head during my time volunteering in Haiti with STAND (Sustainable Therapy and New Development) The Haiti Project, a nonprofit organization, dedicated to establishing permanent access to orthopedic rehabilitative services for Haitian adults and children in need through direct patient care and clinical training of its citizens. I landed in Haiti with 20 other STAND volunteers from around the US. We were primarily PTs but a nurse and a physician assistant were with us as well. As soon as we passed through customs in the airport there was a small band playing music on empty buckets and pans – what a welcome! The Haitian people are lovely.

We piled into a bus to begin our journey to Port de Paix, told that it could take anywhere from 6-16 hours. The road was paved for the first half of the trip, but for the second it was not. There didn’t appear to be any rules of the road. Our bus driver would quickly accelerate passing overloaded motos (mopeds) carrying up to four people (no helmets, I might add!), trucks packed tightly full of 20-30 people, other buses and pedestrians. There were vehicles driving in both directions on all sides of the road. To my American eyes, it appeared to be chaos. I later learned from the adult therapists that a large number of the patients they treated came in complaining of pain/injury from moto or vehicle accidents.

The condition of the unpaved road is indescribable. I have been on plenty of dirt roads in our country in VT, CO and AK. I have never seen roads like these. There were huge (2-3’ in diameter) boulders obstructing the roads. There were large gulleys in the middle of the roads. There was evidence that at some point road construction had been started, but nothing was complete.

The view from the bus windows: women carrying, by estimate, 40-50 pound bags of potatoes on their heads, children bathing in the river, babies squeezed in between adults on overcrowded motos, children walking donkeys loaded down with fruits and vegetables, goats with triangular wooden frames around their necks. En route to the clinic we got a flat tire, a noticeably common occurrence.

We arrived at the STAND clinic in Port de Paix at 9pm. Dinner was waiting. For me dinner, and lunch and breakfast, consisted of fried plantains, fried breadfruit and fried bread with Haitian peanut butter. I set up my mattress outside on the balcony with mosquito netting hanging from above. The waves crashing below me, I slept on and off through the night. When I woke up the next morning, I could not believe the view. It was a million dollar scene. 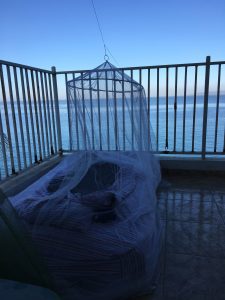 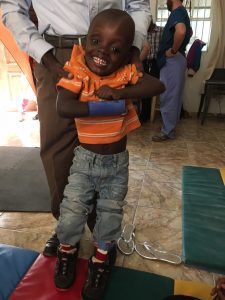 For these children, we built standers, walkers and chairs out of PVC pipes, foam and duct tape. We modified old orthotics we brought from home to fit these children’s feet as best we could. We taught families stretches and strengthening activities. We gave families shoes for their children so their feet would be protected and supported. We used donated Bumbo chairs so that infants who could not sit independently were safe and well positioned when they were not being held. We fabricated wrist splints.

There is an obvious huge difference between healthcare in the States and Haiti. In the Haitian system, only the wealthiest of families can afford healthcare. The way I saw this play out is that a child, for example, with microcephaly, in the States would be followed by MDs, PTs, OTs, STs and other medical and developmental professionals from birth. However, in Haiti, this is not the case. A child with a severe medical condition and disability is not given proper care early on, so his/her growth and development is stunted more than a similar child with the same diagnosis here in the States. 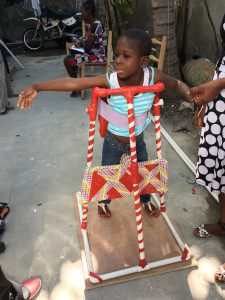 The question I keep being asked since back in the states is “What kind of impact do you think you really had on these people?” And, that was exactly what I was most reluctant about prior to my trip. To that, I answer, “I know that I had an impact on these families and these children”. I saw so many smiles after children spent time in our clinic. There were so many simple, small things that I did while I was in Haiti that were so impactful.

One Response to “Haiti Thoughts”