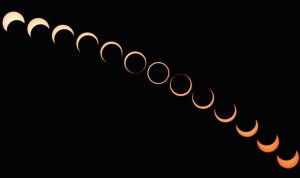 Let’s face it: even though our presence in the moment seems to be encouraged nowadays more than ever, “the brain is all about anticipation and prediction”, as neuroscientist Josef Rauschecker, PhD has reminded us. (Rauschecker, 2009) From infancy we’ve been learning about relationships between sensory stimulation and our behavior, relationships rooted in pattern seeking and recognition that help us think ahead to events, prepare ourselves, and act in relation to those events which we expect to happen.

We may have thoughts about the upcoming solar eclipse, a summer get-away, special events on the calendar, what’s in store for the day, tonight’s dinner, tomorrow’s meeting, a new school year approaching, a pending responsibility, taking a shower, flushing a toilet, stepping onto a sidewalk, walking into a room, looking at that person, saying something to someone, a new video game, and so forth. The list of events we might ultimately anticipate is seemingly endless, ranging from something like a rare astronomical phenomenon such as the Great American Eclipse, also predicted to be an extraordinary visual experience for its viewers, to a mundane task such as putting on a shoe or climbing a flight of stairs. When we take action, prepared with and by our thoughts related to life events (aka sensory events), rather than the actual events themselves, we are engaging in “anticipatory behavior”. Whether in response to special circumstances or everyday life events, simple or complex, anticipatory behaviors can be adaptive (enabling the individual to meet environmental, situational, personal or interpersonal demands), or maladaptive (interfering with participation).

Prediction-> Expectation -> Anticipation
Synonymous with expectation, prediction, excitement or suspense in the English language, anticipation, in neuroscientific language and in the study of mind and cognition, is viewed a bit more distinctly. Giovanni Pezzulo, PhD, a researcher of cognitive processing, and his colleagues help us understand the distinction, and progression in time, between prediction, expectation and anticipation –

Prediction – a representation of a particular future event that the mind thinks will happen
Expectation – the mind thinks something will happen and somehow becomes prepared for it
Anticipation – a future –oriented action, decision or behavior based on a prediction; anticipatory behavior is directed toward events that are expected to happen, not toward events that are immediately present

“Neural clairvoyance”
Dr. Rauschecker refers to the brain activity when someone anticipates an act or sensory input that has yet to occur as “neural clairvoyance”. Studies conducted by him and his colleagues, have found prefrontal cortex and premotor cortex, basal ganglia and cerebellum to be involved in anticipation, acknowledging that anticipation involves strong activity in areas of brain responsible for preparing the body to move. The hippocampus, part of the limbic system involved with memory and spatial navigation, has also been found to be involved with anticipation (Fleisher, 2007).

Considering that anticipation and anticipatory behaviors are related to sensory input that has yet to occur, it is important to recognize ways in which disordered sensory processing could affect not only anticipation, but the prediction and expectation that are part of the progression. Here are three:

Studies on pain patients have identified greater likelihood of attention to and inferred threat from seemingly tolerable stimuli in patients with heightened anticipation of pain. (Lyoyd, 2016) This seems much like what is seen in the anticipation shown by individuals with sensitivities to sound, touch, movement, positions, taste and smells who demonstrate fear, increased protective instinct and reduced discriminative abilities. Their anticipation of an expectedly adverse stimulus, rather than the stimulus itself, has shaped their responses to the actual input.

If a prediction happens to be based on insufficient or unreliable sensory input and related memories, preparations and actions are likely to align with a fundamental misrepresentation of the given future event. Consider, for example, a child who is uncomfortable entering birthday parties due to his difficulty with novel, complex multi-sensory environments. This child’s anticipation of the birthday party will likely be related to his thought of going to a place that makes him uncomfortable rather than relating to a thought of a pleasurable event.

Lastly, if the anticipatory behavior ultimately interferes with successful participation, then the experiential or sensory basis for future adaptive anticipation would likely be further compromised. The individual stays “stuck”, or stereotypic, in his maladaptive response because that action, and the stimulus it provides, is what he has come to associate with the event. An example of this would be a child who regularly gets up and jumps during circle time as his turn approaches, rather than doing what is expected during a turn. His jumping with turn taking may have begun because it either helped him stay at the circle, it could have felt good at a time when he wasn’t sure of himself, or perhaps it began because he was excited about circle and his turn. While there is likely to be a self-regulatory basis to the jumping, what has naturally evolved is an inclination to jump during circle rather than engage in the given circle task.

The sensory-cognitive nature of anticipatory behaviors and the prediction and expectation involved with anticipation is worthy of our consideration when planning intervention. Steps taken to promote adaptive responses to life’s events assist not only with participation in an event that is actually taking place, they serve to shape the prediction, expectation and anticipation of future events. Why cast a shadow on someone’s shine unless it’s part of a glorious rhythm and alignment?